Financial inclusion is on the rise globally, accelerated by mobile phones and the internet, but gains have been uneven across countries, a new World Bank report finds.

Financial inclusion allows people to save for family needs, borrow to support a business, or build a cushion against an emergency. Having access to financial services is a critical step towards reducing both poverty and inequality,” said Jim Yong Kim, president, World Bank Group. “New data on mobile phone ownership and internet access show unprecedented opportunities to use technology to achieve universal financial inclusion.”

WHO REMAINS UNBANKED AND WHY?

Around 1.7 billion adults worldwide remain unbanked. In high-income economies, six percent of adults do not have a financial account. In developing economies 46 percent do not. Indeed, nearly half of those without an account live in just seven countries: Bangladesh, China, India, Indonesia, Mexico, Nigeria and Pakistan.

The 2017 Global Findex survey asked unbanked adults why they did not have a financial account. The most common reason was having too little money to use an account. This was cited by two-thirds of respondents.

A quarter said cost and distance were barriers. A similar proportion said that they did not have an account because a family member already had one. Lack of documentation and distrust in the financial system were reasons cited by 20 percent of respondents. A small proportion (six percent) cited religious concerns.

ROLE OF GOVERNMENT AND PRIVATE SECTOR

Governments can play a significant role in increasing financial inclusion. Paying government wages, pensions and social benefits directly into accounts could bring formal financial services to up to 100 million more adults globally. 95 million of these adults live in developing economies.

In the agricultural sector, around 235 million unbanked farmers worldwide receive cash payments for produce. 59 percent of them have a mobile phone and could receive digital payment. Digitising agricultural business supply chains also helps farmers build payment and credit histories. And in turn expands access to credit, insurance and other

Switching from cash to digital payments can also reduce corruption and improve efficiency for governments. For example, in India the leakage of funds for pension payment dropped by 47 percent when the payments were made through biometric smart cards rather than in cash.

The Global Findex database includes data on how people in 144 countries use financial services. It is based on more than 150,000 interviews. 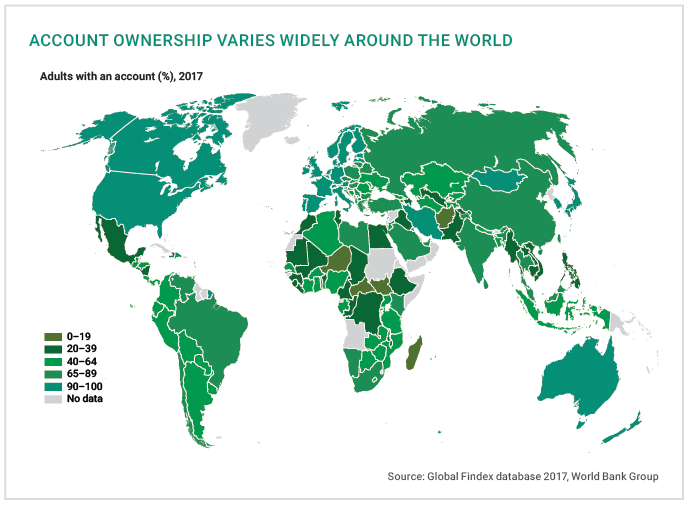 THE SCOURGE OF RANSOMWARE CONTINUES