Cifas, the UK fraud prevention service, has released new figures showing that identity fraud has fallen for the first time since 2014. Figures show a 5% drop in the first six months of 2018 compared to the previous year. 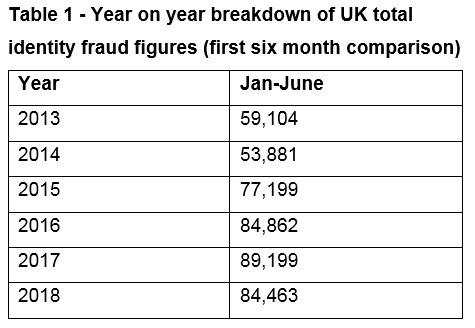 Cifas members recorded 84,463 cases in the first six months of the year, a 5% drop compared to the same period in 2017 (89,199). Despite the reduction, identity fraud still represents over half of all fraud recorded by the UK’s not-for-profit fraud data sharing organisation, with 87% of identity frauds perpetrated online.

The latest figures show there has been a reduction in the volume of bank accounts being targeted by identity fraudsters, with cases falling by 12% (2,882 fewer cases), and a 34% reduction in attempts to obtain mobile phone contracts (3,096 fewer cases).

However the figures reveal a sharp rise in identity fraudsters applying for plastic card accounts, with cases increasing by 12% (3,454 more cases). The figures also show identity fraud against online retail accounts has risen by 24% (1,232 more cases).

The vast majority of identity fraud happens when a fraudster pretends to be an innocent individual to buy a product or open an account in their name. Victims may not even realise that they have been targeted until a bill arrives for something they did not buy or they experience problems with their credit rating.

To carry out this kind of fraud successfully, fraudsters need access to their victim’s personal information such as name, date of birth, address, their bank and who they hold accounts with.

Fraudsters get hold of this in a variety of ways, from stealing mail through to hacking; obtaining data on the dark and surface web, exploiting personal information on social media, or though ‘social engineering’ where innocent parties are persuaded to give up personal information to someone pretending to be from their bank, the police or a trusted retailer.

“Identity fraud cases reached record levels in 2017, therefore it is positive that we have seen an overall reduction in the first six months of the year,” says Sandra Peaston, Director of Strategy, Policy and Insight, Cifas.

“However, these new figures demonstrate that identity fraudsters adapt quickly to try and circumvent security measures. The re-targeting of plastic cards, following a drop in 2017, is a prime example of this.

“With identity fraud remaining uncomfortably high, more personal information available online, and increasing numbers of data breaches, the protection of personal data must be viewed as a collective responsibility.

Everyone should play their part, from individuals and organisations taking steps to protect personal data to businesses ensuring their fraud prevention practices effectively defend against evolving tactics employed by identity fraudsters.”

Crypto-coining it: How cryptocurrencies went mainstream