Americans are having increasing trouble paying their credit-card bills, a potentially ominous sign for an economy reliant on consumer spending for some two-thirds overall activity.

Michael Pearce, an economist at Capital Economics, does not see the spike as a major threat to the growth outlook for now. But given the prospect of higher interest rates from the Federal Reserve next year, it could become problematic.

“The increase in new delinquencies may be an early sign of stress in household finances,” he wrote in a note sent out to clients on Friday.

“After all, credit card lending is one of the most expensive forms of borrowing, and missing a credit card payment doesn’t carry the same risk of repossession as falling behind on mortgage or car payments might,” Pearce added. “The rise in new delinquencies is difficult to square with the continued strength of the labor market.” 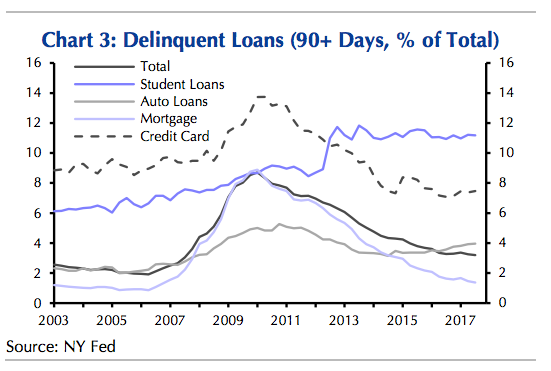 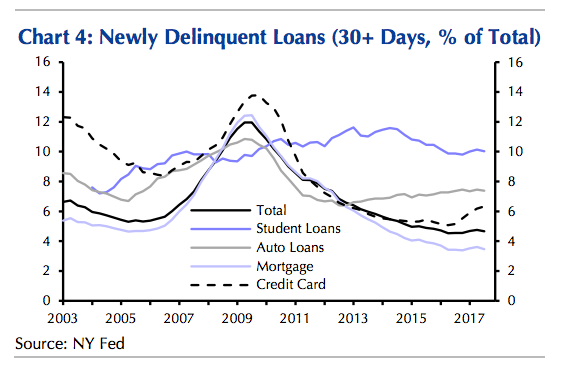 The Fed expects to continue raising borrowing costs next year and winding down its large balance sheet as the US unemployment rate hovers nears historic lows – despite an inflation rate that continues to undershoot the central bank’s 2% target.

Still, Pearce does not see any substantial short-term economic or financial fallout from the credit-card sector, even if delinquencies were to spike sharply higher. For one thing, elevated US credit-card interest rates are already largely untethered from the Fed-set federal funds rate, which is more relevant for housing loans and auto loans. Fed funds is just 1% to 1.25% after four increases starting in December 2015, and yet many Americans pay credit-card rates well into the double digits.

Also, unlike the mortgage market, the just over $1 trillion or so in outstanding credit-card debt does not appear large enough to pose a systemic threat to the banking system in a $19 trillion economy. At the same time, overall household balance sheets are in better shape than they were before the financial crisis, even if the reality between richer and poorer households differs sharply. 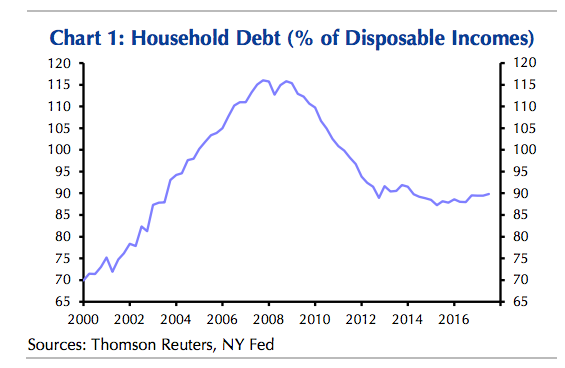 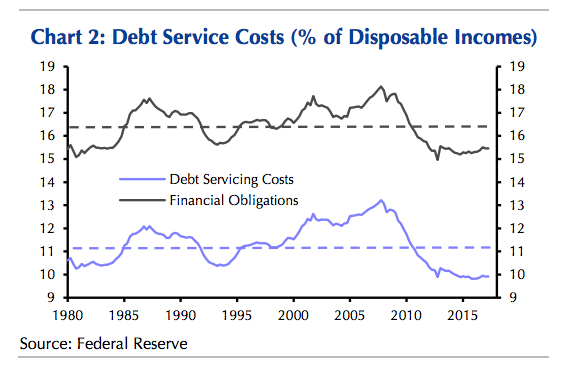 “Overall, the rise in new credit card delinquencies isn’t too worrying for now and we suspect consumption growth will remain around 2.5% annualized over the coming year or so,” he writes.

“But it is a timely reminder that the current economic expansion will not last forever. The five rate hikes we anticipate between now and the end of 2018 will take some of the wind out of consumers’ sails, which we expect will drive a slowdown in economic growth in 2019.”

In other words, the short-term risks from a blow-up in the credit-card sector are not an immediate economic or financial risk per se but could be an early signal of other mounting troubles for other sectors, which together could present considerable challenges to the economic outlook.

The New York Fed recently sounded a warning about the $200 billion auto-loan market, noting that delinquencies in subprime car loans had nearly doubled since 2011.