The views and opinions expressed here are solely those of authors/contributors and do not necessarily reflect the views of Cointelegraph.com. Every investment and trading move involves risk, you should conduct your own research when making a decision.

Most traditional investors have stayed away from Bitcoin citing its volatility. Yet, this has not stopped Direxion Asset Management LLC from planning to list “leveraged” and “inverse” funds that will rise or fall twice as fast as the Bitcoin price.

Nevertheless, the big question is whether the US securities regulators will give the nod to such an instrument. Any ETF acceptance is likely to give a big boost to cryptocurrencies.

With the market capitalization of the crypto universe inching towards the $1 tln mark, let’s see what kind of trading moves might seem suitable.

We had suggested initiating long positions in Bitcoin at $15,500 in our previous analysis. The level was reached yesterday, Jan. 5, which triggered the long position. Subsequently, the price broke out of the resistance at $16,500 and rallied to a high of $17,083.67, where it witnessed profit booking. Currently, the cryptocurrency is in a pullback. It is likely to find support at the $15,500 mark that had served as resistance earlier. The trendline support is also at the same level.

The BTC/USD pair is still not out of the woods. If it returns from the current levels and breaks the neckline at $13,000, it will complete a complex head and shoulders pattern, which will be a bearish sign.

Therefore, we recommend keeping a stop loss of $15,000 in our positions. It’ll reduce our risk.

On the upside, we expect a rally to $19,000 levels if Bitcoin sustains above $17,000. But traders should trail their stops higher as the trade moves in their favor.

For the past two days, Jan.4-5, Ethereum has been facing profit booking at the resistance line of the ascending channel. 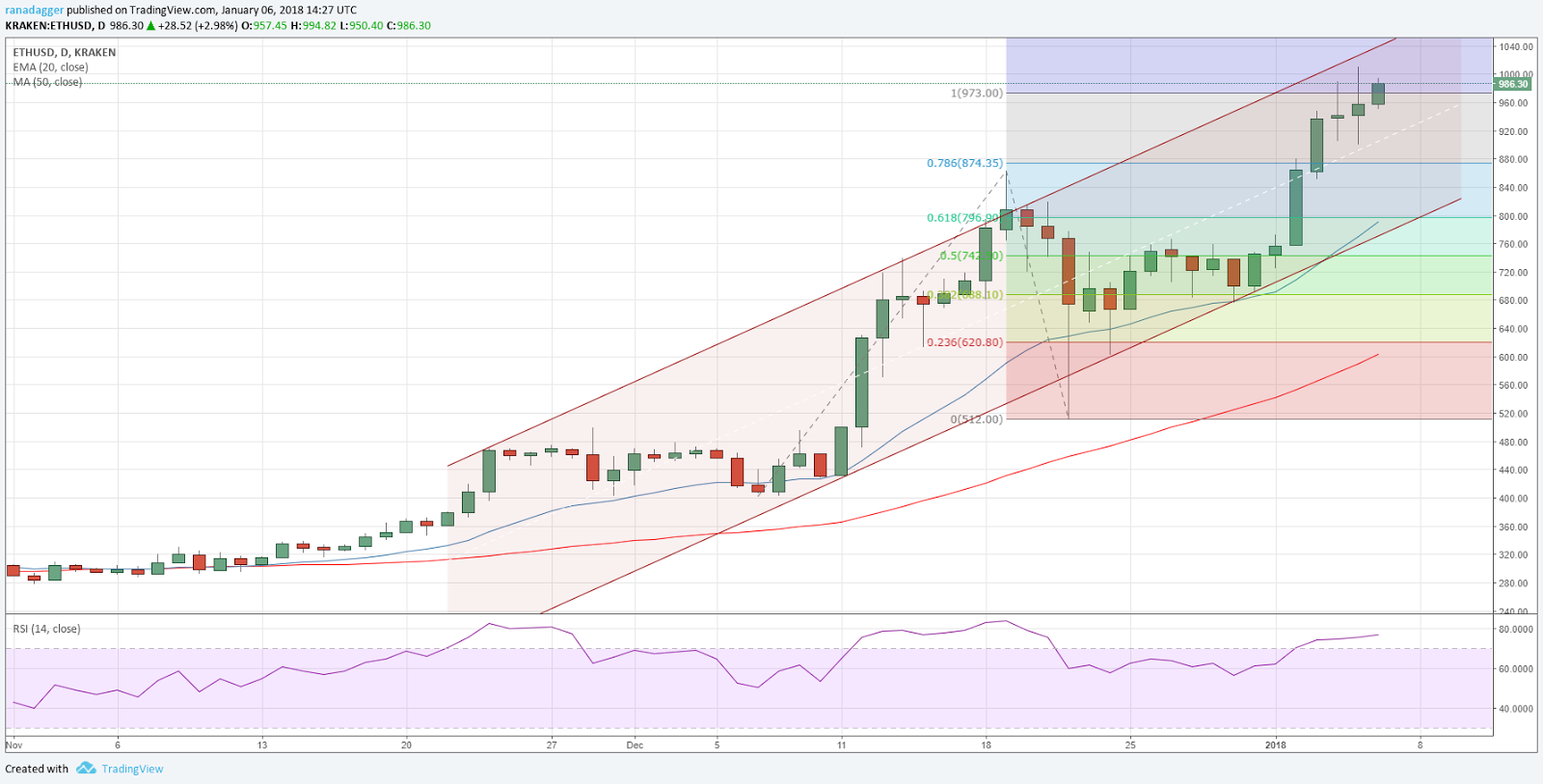 It has not given up any ground, which shows buying strength at lower levels. We anticipate another attempt by the bulls to break out of the channel.

In case the bulls fail to break out of the ascending channel, a fall to the lower end of the channel at $840 is likely. That’s why we believe partial profits should be taken between $1,000 and $1,040 levels. Rest of the positions can be held with a close stop loss depending on the strategy of the trader.

Though Bitcoin Cash broke below the trendline, it held on to the $2,291 levels that has provided support for four days in a row. 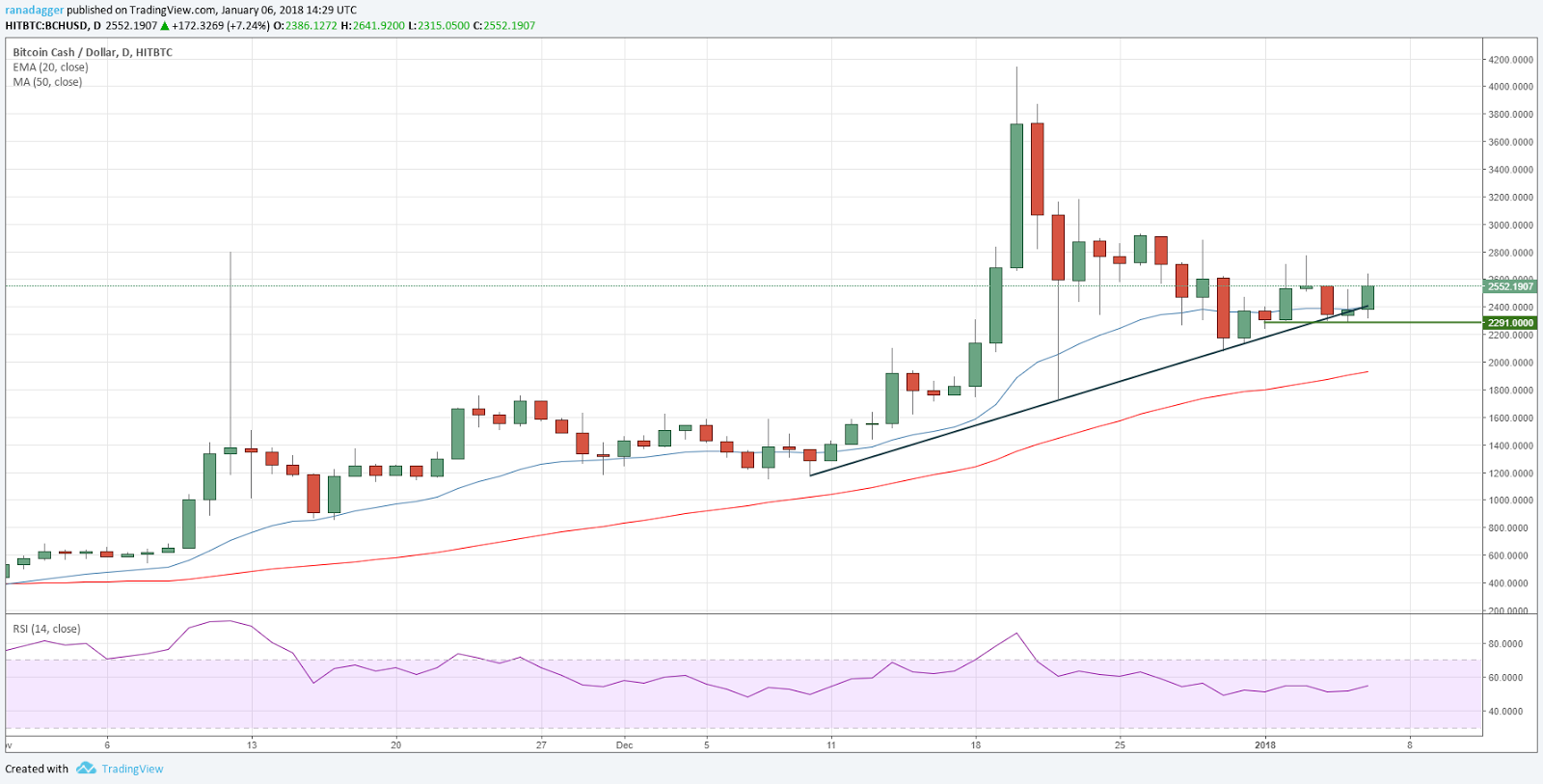 We don’t have a clear buy set up, so we are not recommending any trade.

Ripple is currently in a pullback after reaching a high of $3.317 on Jan. 04. However, the fall to $2.15 levels yesterday, Jan.5, was bought aggressively. In the near term, this is a critical support point, below which the correction is likely to extend to $1.76 levels. 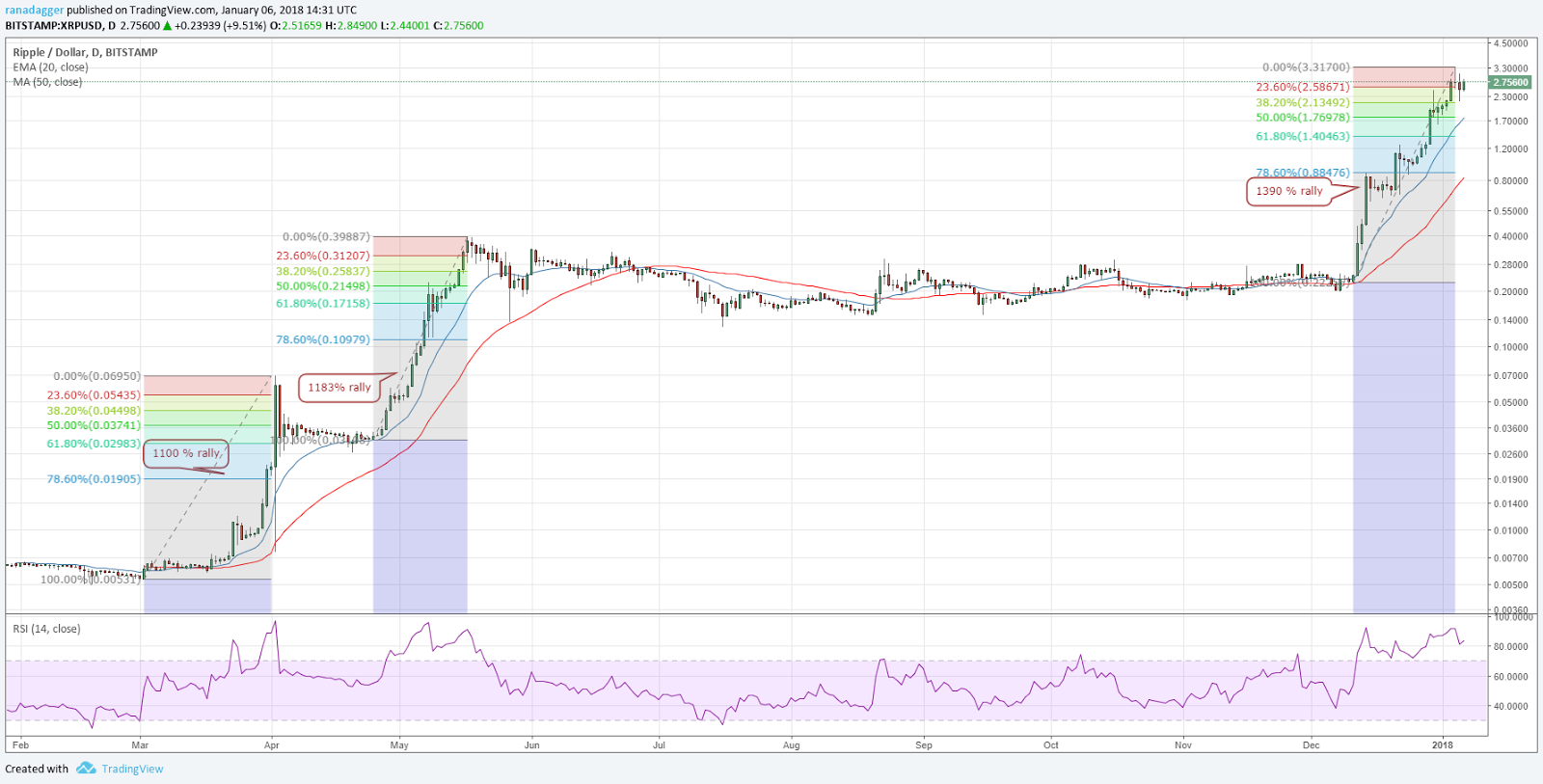 In order to understand whether the traders should expect a further rally or a correction, we have gone back to the start of the year using a log scale.

Ripple has a history of sharp rallies, which are followed by a period of correction/consolidation.

We find that the duration of the up move and the quantum of the rally is almost similar in all the three instances. So there might be a chance the XRP/USD pair has just formed a short-term top.

Both the previous corrections found support at about 61.8 percent Fibonacci retracement of the rally. If history repeats itself, we are likely to see a fall to $1.40 levels.

However, this is not an exact science and the above-mentioned projections will be invalidated if Ripple breaks out and sustains above $3.317. As the bears failed to break down of the range, we expect the bulls to attempt to rally to the upper end of the range.

Currently, the IOTA/USD pair is taking support at the 20-day EMA but is facing resistance at $4.34 levels.

If the bulls succeed in breaking out of the overhead resistance, a rally to $5.59 is likely. However, if the bears push the cryptocurrency below the 20-day EMA, it can fall to $3.03 levels.

We suggest holding the long positions with a stop-loss of $2.85.

The bears could not capitalize on the neckline breakdown of the head and shoulders pattern on two occasions. 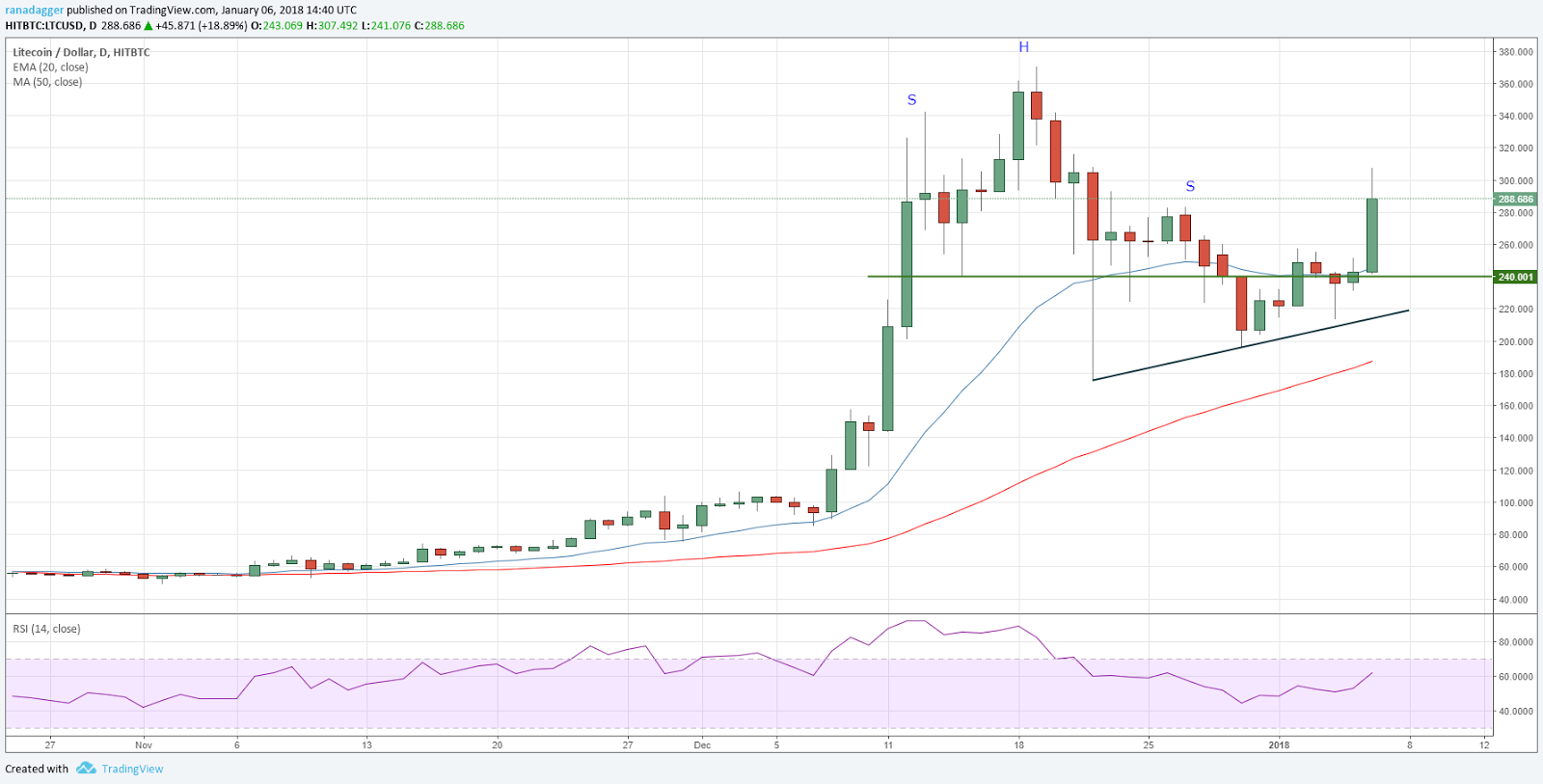 As a result, the bulls are attempting to resume the uptrend. But we expect profit booking at higher levels as the LTC/USD pair climbs to the lifetime highs.

The cryptocurrency will become negative only on a breakdown below $175.

We expect Litecoin to trade in a range for the next few days. Currently, we don’t find any reliable setups, hence, we are not anticipating any trade on it. 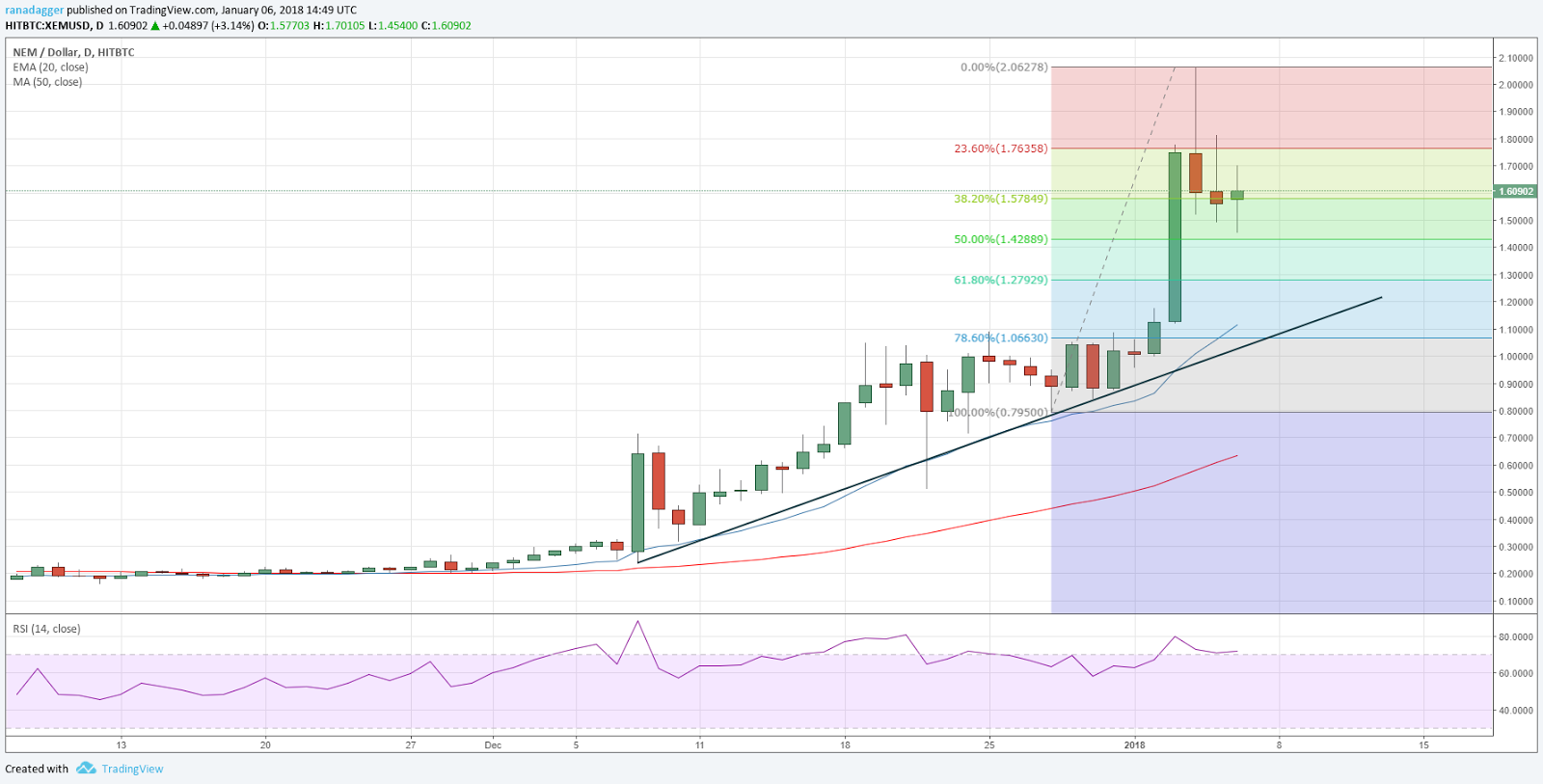 If the $1.4 level holds, we expect the bulls to attempt to resume the uptrend once again. Therefore, aggressive traders can buy at $1.702 and keep a stop loss of $1.4. Our target objective is a retest of the highs. However, this is a risky trade and should be attempted only with about 25 percent of the usual allocation.

Risk-averse traders should wait for a set up with a better risk to reward ratio because if $1.4 level breaks, the XEM/USD pair is likely to fall to the trendline support.

We had recommended traders to book profits and trade with a close stop loss. The ADA/BTC pair topped out on Jan. 4 at 0.00009180. 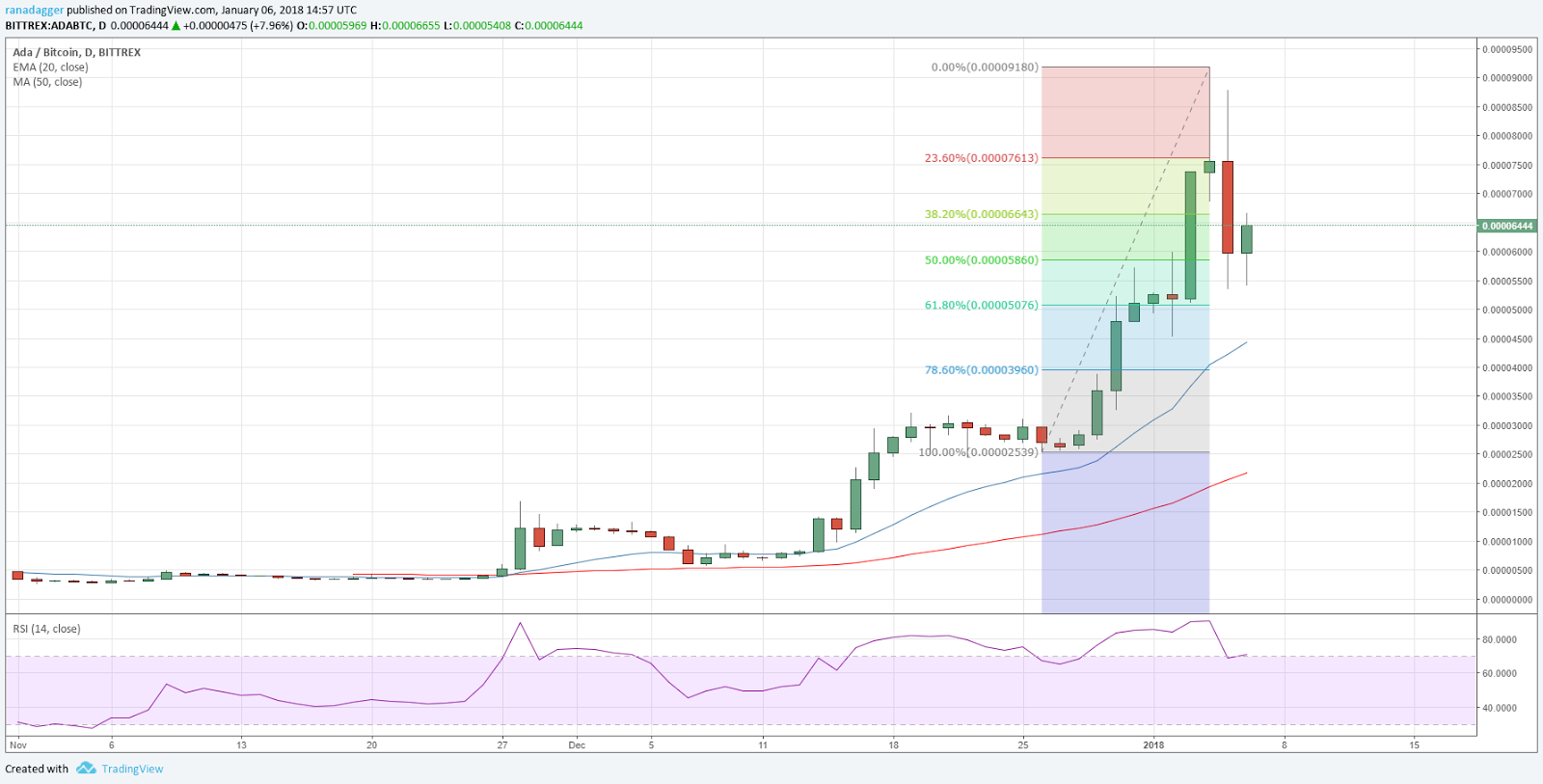 If the levels hold, we may see an attempt by the bulls to resume the uptrend. However, we expect to see profit booking at higher levels. We await a range bound move in ADA/BTC for the next few days.

The market data is provided byTradingView.