Card-accepting merchant outlets rose by 7 million in 2016 to 61 million, according to a recent research report from RBR, “Global Payment Cards Data and Forecasts to 2022.” Double-digit growth was reported across Asia-Pacific, central and eastern Europe and the Middle East and Africa, the report said.

Despite the growth, all three regions remained underserved in terms of card acceptance. The total number of outlets for payment cards worldwide is expected to reach 85 million by 2022, according to a press release about the report. 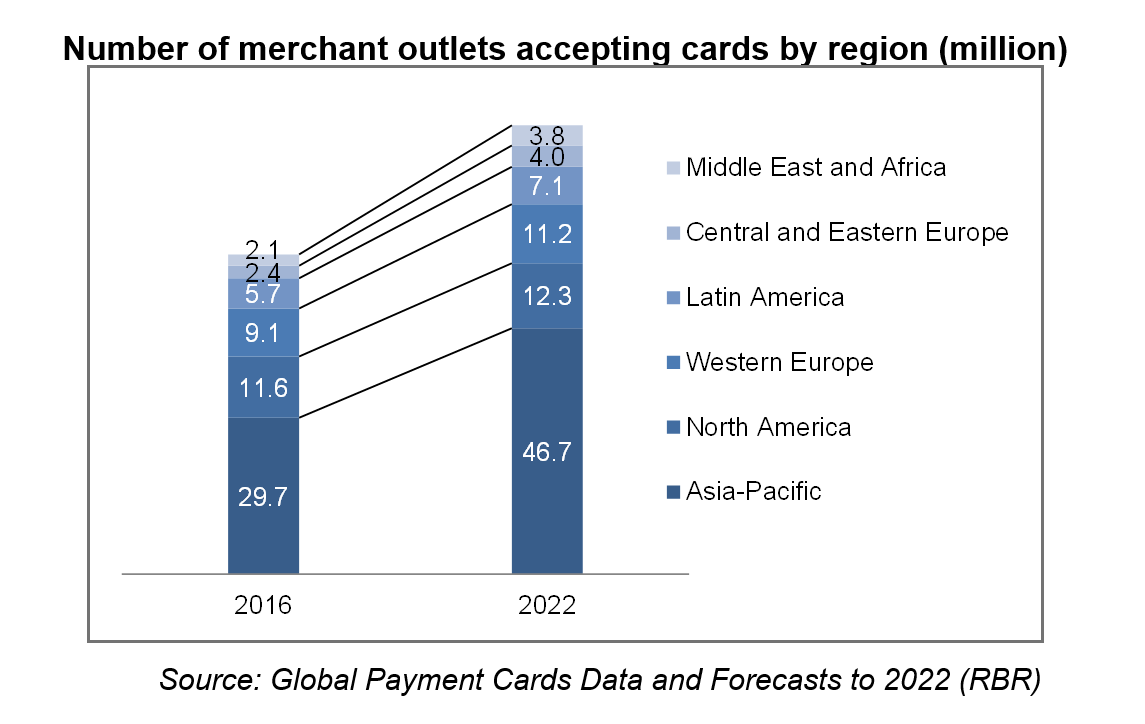 In Kazakhstan, legislation requiring merchants to accept card payments contributed to a 50 percent growth in outlets. Growth in card-accepting merchants in India jumped to 45 percent on account of caps on EFTPOS terminal charges and the removal of terminal taxes.

Regulations are expected to deliver a greater impact, with merchant service charges expected to fall as a result of interchange fee caps imposed by the European Commission.

Additionally, new regulations are expected to lower fees in less-developed markets such as Argentina and Malaysia, improving the outlook for card acceptance.

Growth in developing markets has been restrained in part by cultural preferences for cash. However, the report found growing support from governments and industry players. Thailand and Ukraine, for example, are promoting financial literacy and cashless payments.

Such efforts encourage consumers to pay regularly by card, while merchants who do not accept cards risk losing business.

“The recent strong growth in card acceptance looks set to continue, fuelled by a combination of falling merchant fees and rising consumer demand,” Chris Herbert, RBR cards and payment expert, said in the press release. “In addition to rapid growth in developing regions, healthy market conditions in more mature countries in western Europe have the potential to unlock new opportunities for the acquiring sector.”